Adobe Brackets is a new text editor by Adobe built in Javascript. It certainly has some stiff competition from long time favorites like TextMate and Sublime Text 2 (my personal favorite and daily driver), but I personally have my doubts as to its future success.

What is Adobe Brackets?

Essentially, Adobe Brackets is a new text editor for developers. It is still in active development and is open source. What is unique about Brackets is the way it’s built– it is all built in HTML, CSS, and Javascript. Unlike C++ or other native languages that have a higher barrier of entry, Javascript will allow for more developers to extend and improve the editor.

The source code for Adobe Brackets is available on GitHub.

After you download Adobe Brackets and drop it into your /Applications on Mac OS X, it’ll open a new window with a sample project.

Now, being an editor in development, there are a few issues. For instance, trying to open the screenshot in the sample project resulted in an error. 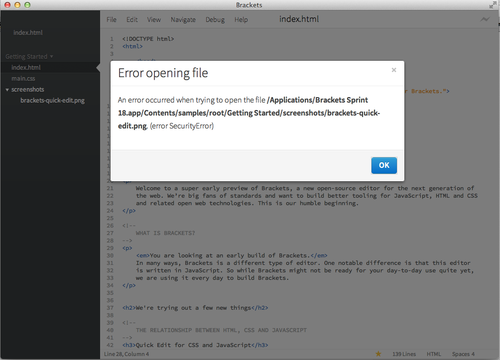 You can use Brackets like a regular text editor. It has all of the basic features like syntax highlighting and all of the shortcuts (Control/Cmd + S to save) that you are used to, and pseudo-tabbed interface so you can have more than one document open at once.

Brackets has a few great features that I haven’t seen in another text editor.

You can edit colors in your CSS stylesheet with a color picker using the Quick Edit feature. Simply right click a hex color code and a color picker will pop up, which allows you to select a new color in RGB(a), Hex, or HSL(a). 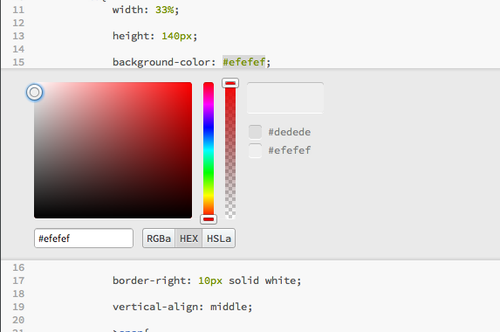 Using the sideways lightning bolt icon, you can see live changes to your CSS. However, the feature is currently limited to Chrome and CSS, so if you update the HTML of a web page, you’ll still need to refresh.

Even though there are several cool features of Brackets, it’s missing a couple of features I’d like to see.

The multiple cursors feature of Sublime Text 2 is one of the two reasons I use that editor (the other is how light weight it is, which is one reason I’ll never use Eclipse or a Java based IDE). If you’ve never used multiple cursors before in a text editor, it’s one thing you will always miss in other environments. Essentially, it allows you to place multiple cursors in your document and make multiple changes simultaneously.

Because Brackets isn’t native, there’s a few points where the app becomes confusing when compared to native apps. One big example is the application menu on Mac OS X. Normally, the menu is located in the menu bar app the top. However, with Brackets, they opted to use a non-native menu located within the app window itself.

Overall, Brackets is a great start and I’d like to see where it ends up, but because it is in development and lacking a lot of features and has a few problems (some of which will never be resolved, like the non-native app), it’s hard to recommend it over other, native editors.