In the past, I've done a lot of work with PHP and the Laravel framework. One of the coolest features about Laravel is its Inversion of Control system, which dynamically injects dependencies into your application at runtime.

This is beneficial for many reasons, including modularity, readability, and testability. With a dependency injected system, you can simply request that your application receives an instance of an object, and the DI container will do all of the work to initialize the object and all of its dependencies.

Dependency injection is a relatively advanced topic, but the benefits outweigh the cost. For example, consider the following scenario:

This is an extremely trivial example, but as you can see, our database object depends on the configuration. If we simply create a single instance of the database, this isn't a problem-- we can simply create a new configuration object and pass it in the constructor. But, what if our application is composed of multiple controllers, utilities, and snippets of code that all need a database instance? Suddenly, we either have to create a large number of database objects (and consequently, a large number of configuration objects), or pass a single instance around somehow.

Laravel's IoC system is great-- it's wired up throughout the framework so that most method calls end up having dependencies injected automatically, and it even uses the type hints in the method signature to determine what dependencies the method has.

For example, Laravel's IoC system would use the following method signature to pass in the current HTTP request object and a database instance, automatically:

The DI pattern doesn't just apply to PHP and Laravel-- Javascript frameworks such as Angular and Aurelia have their own dependency injection systems, with the latter even using ES7-style decorators. Unfortunately, these systems are tightly coupled with the frameworks, meaning that they aren't very useful for developers that want to use them with Node.JS.

Needlepoint is a new DI framework for Javascript environments that supports the latest ES6 and ES7 features. Everything works with ES6 classes, and the dependency injection parameters are defined using the decorators ES7 proposal.

Need to learn how to use the new ES6 and ES7 features? Check out my in-development course on Modern JavaScript.

Declaring Dependencies of a Class

There's two key decorators that indicate how a class should be dependency injected. First is the @dependencies decorator:

Simple pass in the classes to the decorator, and the dependencies will be injected into the constructor:

The second decorator is used to declare a class a singleton:

The best way to introduce the library is to simply illustrate how it works:

This example is very similar to the PHP example we previously had-- a database needs a configuration object to configure itself. As you can see, in our index.js file we have a single call to container.resolve(Database) which does all of the magic: the database instance is created and passed in an instance of the configuration, with both being singletons. If we were to call container.resolve(Database) again, we would receive the exact same instance that was created the first time.

The same is true for the configuration object-- only a single instance is created for the entire application, so we might add a new "queue" class that uses the same configuration instance:

Now, we can run container.resolve(Queue) in our index file and get an instance of the queue class. Of course, since this is the first time that the queue is resolved (either explicitly or as a dependency of another object), it is actually instantiated. However, the constructor is passed in the previously created configuration object-- the same exact instance that was passed to the database. 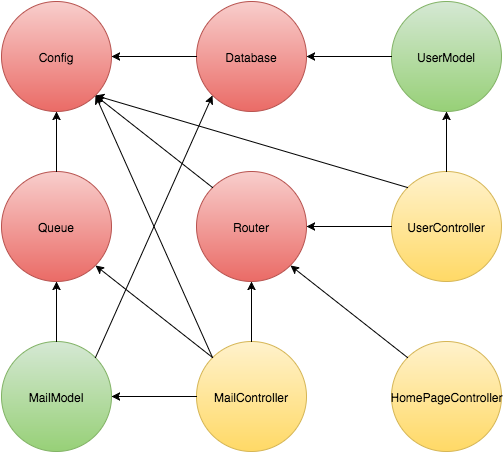 Wiring that up manually and keeping track of everything would be a nightmare (and this isn't even close the complexity of a real application), but with Needlepoint you can simply define each class's dependencies with the decorator.

To find out more about to use Needlepoint and dependency injection in your Javascript applications, you can visit the GitHub repository for the project. The entire thing is open source and written using the latest ES6 features, meaning Babel is required for most Javascript environments.

You can use Needlepoint in your Node.JS applications fairly easily. Simply install it with NPM and ensure you have Babel installed and configured:

And, in your Javascript:

There's still a ton of things left to do, but you can always help out by submitting a pull request or even just filing an issue.